Does Delta-8 THC Appear in a Drug Test?

Medically reviewed by Lynn Marie Morski, MD, Esq.
Written by Tiannah Pedler, M.A.
5 min read
0 comments
Read Later
This article may contain links to some of our affiliate partners. These are brands we trust and brands we feel represent the highest quality standards. When clicking links, we may earn commissions to help support our site. Learn more by reading our full disclaimer.

After decades of prohibition, many are starting to legally benefit from the 110+ cannabinoids in marijuana and hemp. Cannabis and its cannabinoids remain federally illegal, barring specific prescription drugs which contain either THC or CBD. However, over two-thirds of American states have a medical marijuana program. The majority of states also permit CBD, even if there aren’t many state-specific laws.

Most of the media attention focuses on CBD and THC. Yet, there are dozens of other cannabinoids with therapeutic potential. Delta-8 THC is one of the most hyped, but there is confusion over whether this trendy cannabinoid shows up on a drug test. This article outlines the answer – but first, let’s learn more about delta-8.

The Delta-8 series is the latest release from PureKana, and we have to say, these products do not disappoint. Offering both a hearty quantity of Delta-8 and the unique compound CBG, this is an innovative option, ideal for those who want to mix up their routine a little and try something new.

There’s More Than One Type of THC!

Most cannabinoids in the Cannabis sativa plant originate from CBGA, the so-called ‘mother of all cannabinoids.’ The plant’s enzymes turn CBGA into cannabinoid acids such as CBDA and THCA. Once these acids are exposed to heat (decarboxylation), they become the cannabinoids we often enjoy. For instance, THCA becomes THC, the famed intoxicating cannabinoid.

However, most people don’t realize that there are multiple forms of THC. Delta-9 THC is the one we’re most familiar with, as it is usually the most abundant cannabinoid in marijuana.

Chemical variations of d9 THC include THCA, THCV, THCP, THCC, delta-10, and delta-8. Structurally, Delta-8 is almost identical to delta-9. The main difference is that delta-8’s double bond occurs on the eighth carbon in the chain of carbon atoms. Delta-9, as the name suggests, has its double bond on the ninth carbon. This seemingly tiny difference has a significant impact on how each cannabinoid impacts the body. While both cause intoxication, delta-8’s effects are milder.

This makes it an appealing option for individuals with a low THC tolerance. It’s also possible that Delta-8 could provide similar potential therapeutic effects to delta-9, with few adverse effects.

How Do THC Drug Tests Work?

There is an assumption that drug screenings are highly sophisticated tests. In reality, they are flawed and show more false positives and false negatives than many people realize. 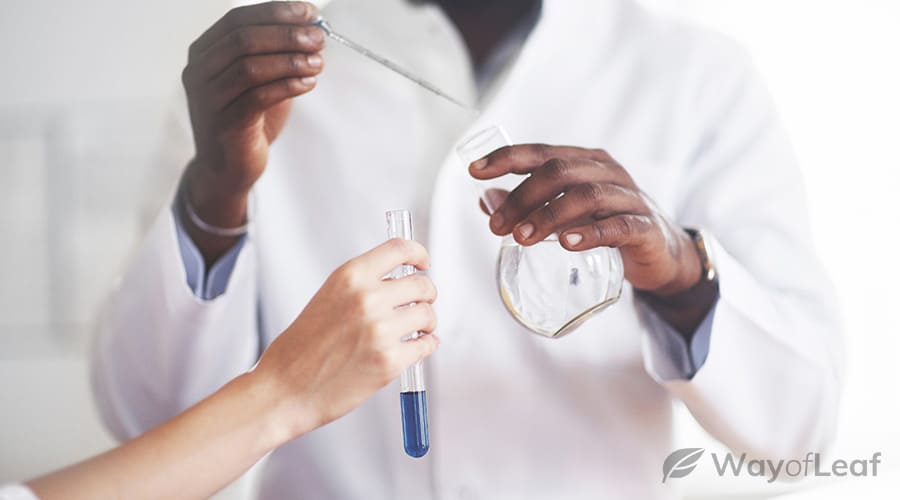 In a urinalysis, a level of 50ng/ml of THC-COOH metabolites or higher is considered a ‘fail.’ A second test, using sophisticated LC-MS technology, is used to confirm the initial positive. This confirmatory test’s threshold is 15ng/ml.

Related article
Will Delta-8 THC Get You High?

Know what to expect …

Therefore, delta-8 THC DOES show up on a drug test, which means you could get fired from your job. If you use this cannabinoid and face a drug screening, you’ll need to take action to avoid testing positive.

Even though delta-8 is technically not illegal in many states, employers in most locations can terminate an employee’s contract if they test positive for THC metabolites.

How Can I Pass a Drug Test After Consuming Delta-8 THC?

It is essential to remember that the metabolites produced after using delta-8 THC remain in the system for a long time, far longer than its effects. Although it is less potent than delta-9, delta-8 will linger in the body for a while. A lot depends on your metabolism, body fat level, and frequency of use. 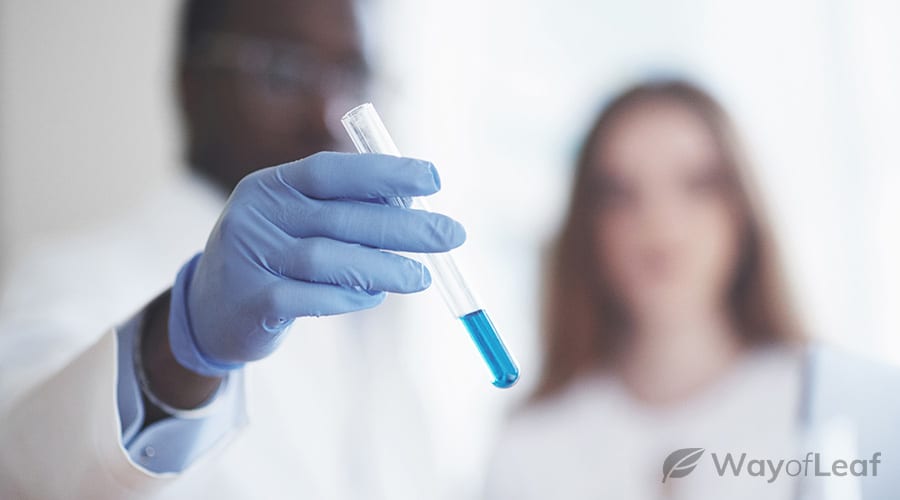 Delta-8 metabolites could remain in your system for up to a week after use, even if you’re a one-time user. If you’re a chronic user of the cannabinoid, it could remain detectable for two months or more!

First and foremost, you’ll need to abstain from using delta-8 or any other form of THC to ensure it leaves the body.

Also, it is important to remember that THC clings to the fat cells in our bodies. Therefore, your body fat level plays a role in how quickly the metabolites leave your system. Individuals with a faster metabolism can also expect faster removal of the cannabinoid from their bodies.

First and foremost, you’ll need to abstain from using delta-8 or any other form of THC to ensure it leaves the body. If time is a factor, you can try the same methods as you would for trying to flush delta-9 from your system. Please note that we don’t guarantee the efficacy of ANY of the following options. We are also assuming that the drug screening in question is a urinalysis.

Hydration is Important, Just Not as Much as You Think

An age-old method of quickly removing THC metabolites involves drinking enormous amounts of water to ‘flush’ them from your system. This can mean drinking up to two gallons of water a day leading up to the test. However, this practice isn’t nearly as effective as people believe.

A 2012 study published in the Iranian Journal of Psychiatry found that only 20% of cannabis metabolites are removed from the body via urine. In contrast, over 65% of them leave the body via feces. However, please note that excessive laxative use is potentially harmful, not to mention unpleasant.

There are hundreds of detox drinks on the market of varying degrees of quality. Regardless of the brand, however, you’ll have to consume a huge amount of water with the product. These usually contain ingredients such as pectin, which is supposed to help remove THC from the body. Reviews of practically every detox brand are mixed, so don’t expect miracles from any product.

Exercising within 24 hours of the test increases your chances of failing! Exercising can break down fat cells, which releases stored THC metabolites into your system. Therefore, your urine will have a spike in THC COOH just before the test.

If your test is in the morning, make sure you urinate before giving a sample. Your first urination of the day contains the highest amount of metabolites in general. The first and last parts of the urine stream have the most significant number of metabolites. Therefore, when urinating into the cup, try to provide the middle of the stream as the sample.

As an aside, please note that there are laws in at least 18 states that make it illegal to sell or use synthetic urine to cheat on a drug test. You could be fined or even jailed! We don’t recommend it.

Delta-8 is molecularly similar to delta-9 and is broken down into THC metabolites. It is these metabolites that drug screenings look for. Therefore, delta-8 users, even infrequent ones, could fail a drug test. Even in states where recreational cannabis is legal, many places don’t provide protection for employees that test positive for THC metabolites.

Ultimately, if you know a drug screening at work is possible, you may have to abstain from using delta-8.

Consequently, if you use delta-8 THC and have a drug test coming up, you need to find a way to pass it. We have added several options, but none of them has a particularly high success rate. In our opinion, it is also a terrible idea to even think about using synthetic urine.

Ultimately, if you know a drug screening at work is possible, you may have to abstain from using delta-8 altogether. You also need to look into your state’s laws to see if it is one of the few to protect cannabis users.

Delta-8 in the UK: All You Need to Know

Is Delta-8 Legal in Indiana?

Clearing up the confusion

Delta-8-THC vs. Delta-9-THC: What’s the Difference?